The concept of a land port, or a hub, puts intermodal transport at its core. It combines multiple transit and interconnection of containers between roads, railways and seas for efficient and cost-effective transportation.

CRIntermodal is the first joint Sino-foreign rail transportation venture in China. It is responsible for the construction and operation of national railway container terminals, and will build railway container logistics centres in 18 cities in China. CRIntermodel Kunming Terminal was officially put into operation in 2006. Strategically located in the Kunming railway hub, it is the largest container logistics centre in Yunnan Province and the Yunnan-Guizhou Plateau Area.

CRIntermodel Kunming Terminal occupies an area of 82.6 hectares, with a storage capacity of 20,000 TEU and an annual throughput of 1.6 million TEU. It can operate 200 trains simultaneously, making it the most efficient railway freight yard in China today. It is also an important element in the international logistics system of Yunnan's bridgehead strategy for South Asia and Southeast Asia.

Kalmar reachstacker is a star of railway transport

Efficiency, network coverage, service stability, safety and environmental concerns are the drivers behind the development of China’s cargo transport market. In 1995, the first Kalmar reachstackers were delivered to five hub cities on China’s rail transport system, and during the past years, the total number has risen to over 500 reachstackers in operation in rail transport in the country.

"There are nine Kalmar Reachstackers in our terminal, which went into operation between 2013 and 2020. We predominantly use reachstackers to move containers, which is ideal for use in railway freight yards because of its high operating efficiency, low fuel consumption and operating agility,” says Wang Wei, supervisor of the Technology and Equipment Department at CRIntermodal Kunming Terminal.

At railway intermodal terminals, strict timetables must be followed to ensure smooth and punctual departure of container trains. During the busy hours of loading and unloading, Kalmar reachstackers are continuously in operation.

"The panoramic visibility from the cabin helps when operating the reachstacker and improves overall safety for our drivers."

Safety is the top priority

The Kalmar Reachstackers are fitted with the Essential cabin, which is ergonomically designed to enhance driver comfort and operability, reduce fatigue and improve safe operations.

Shi Aijia, a driver from CRIntermodel Kunming Terminal Operations Department says: ''The Kalmar reachstacker is user-friendly. The panoramic visibility from the cabin helps when operating the reachstacker while improving overall safety of our drivers."

30 years of striving for excellence

Since Kalmar established its global reachstacker division in the 1980s, it has accrued more than 30 years of manufacturing and technological experience with several generations of products and the delivery of more than 15,000 reachstackers globally. With that expertise under its belt, the Kalmar reachstacker provides the highest technical and performance standards.

"In addition, I feel that Kalmar reachstackers offer sensitive and reactive spreader controls that perform well. It is a very responsive machine. Especially with the new joystick, all functions can be done in one place. It is very convenient and it greatly improves my productivity," Shi Aijia concludes. 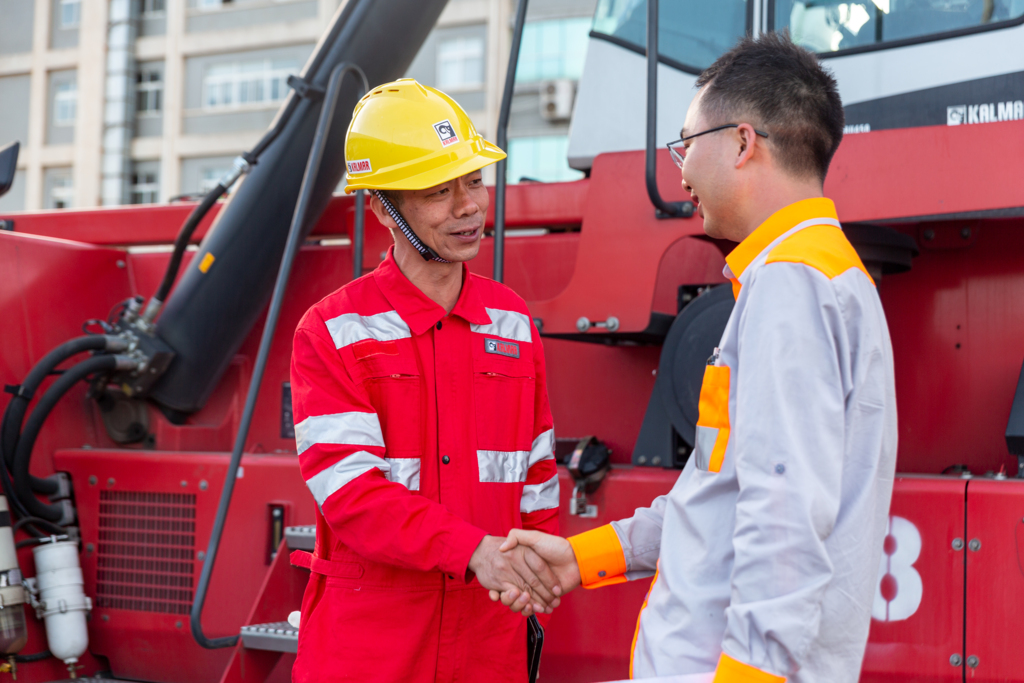 The Port of Tauranga, New Zealand&rsquo;s largest container terminal and premier freight gateway, has been a loyal Kalmar customer for over 20 years. The port&rsquo;s equipment fleet features over 40 Kalmar straddle carriers and recently welcomed a new set of Kalmar hybrid straddle carriers. These machines and other eco-efficient innovations from Kalmar have an important role to play in helping the port to meet its tough carbon-reduction targets and fulfil its ambitious growth plans.
Collaboration Eco efficiency People Services

Kalmar Remote Services put Kalmar&rsquo;s experience and expertise at your service wherever you are in the world. Through these services our experts can help to identify the root cause of automation system or connected equipment issues and recommend appropriate action to minimise system and equipment downtime and maximise availability and performance.
Automation Services

In the cargo industry, efficiency is key. The best way to keep efficiency high and maximise uptime is to ensure that operations run as smoothly as possible, and the best way to do that is to manage and balance resources in a smart way &ndash; and this is where Kalmar MyParts comes in.
Services